‘Binding Identities’, is an ongoing photo series by Safiyyah Saeed that focuses on the binding nature of the familiar and unique aspects of our identities. At the centre is the hijab, which presents a familiar link between Muslim women from all around the world…

”From a young age, I liked to dabble in creativity whether it was drawing, painting, or adorning my bag with rhinestones with those funky DIY gadgets. I enjoy learning how creativity is unlimited and rewarding, and as far as my photographic journey is concerned, the only creative barriers you face are ones that you are putting into place. This is an ongoing realisation as I find my fascination of visual storytelling and aesthetics, and the ability to carry out my visions, is uninhibited.

Coming from a British Pakistani background, I find that I have a wealth of rich culture to explore and understand. Whilst being a Muslim woman, wearing the Hijab, I also find I can play an important role in creating positive and strong narratives for Muslim women. It is the matter of perspective, which has showed its increasing importance to me through the two years that I have been doing photography. From taking pictures with my Iphone to investing in my first DSLR, being behind the lens has showed me what sort of stories I would like to tell. This is how my first series, ‘Binding Identities’ was created.” 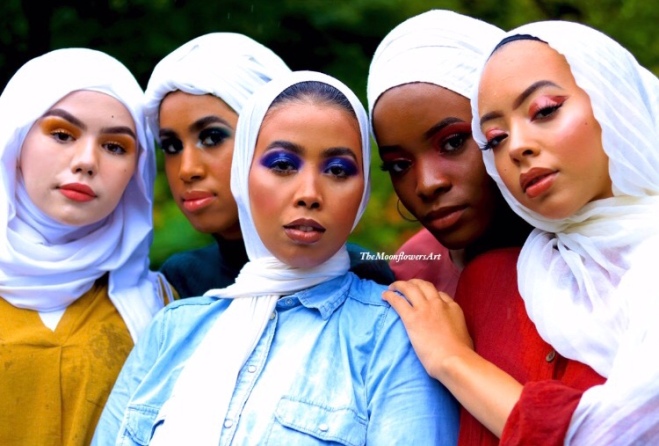 “In the photos above, the prominent white colour of their scarves was chosen as a strong indication that this is an empowering source that binds these women together. However, the distinctive and bold colours, that each model wears, represents their differences, be it their ethnicity or culture, that makes them unique and beautiful. For the second set of photos below, I decided to go with a more subtle and simplistic approach to the different aspects of their identities. I decided on slight variations of browns/creams/whites in their attires as well as different lip colours. This approach I believed was also necessary as the things that make us unique and separates us from one another, aren’t always seen instantly.”