Rahma Suleiman has an energetic, joyful soul that radiates through her infectious smile. She’s a freelance artist who is training to be a maths teacher. On a rainy day in Liverpool, I met up with her to talk all things culture, art, inspiration and business…

I’ve been following your work for quite a while now, you create such refreshing pieces that celebrate your culture. What inspires your artwork?

Thank you! Well, I used to be really bad at drawing and I was jealous of people who were artistic. I was also going through a period of self-discovery and self-acceptance at that time and going through the whole natural hair journey. I barely found any information online for black hijabi women who wanted to take care of their natural hair. I created a WhatsApp group with my black Muslim friends so we could share our own tips. At the time, modest fashion was dominated by Arab bloggers who I couldn’t really relate to. I tried to design a logo for our group chat and I came up with a black woman with an afro and a headscarf draped over it- looking back now it’s the worst thing I’ve ever created! But that inspired me to create images of women wearing hijabs made of Ankara or African fabrics. I’m so inspired by my culture and everything surrounding the black Muslimah experience. It really drives my work and its something that’s not really discussed in the Muslim community. Black Muslims are often alienated and you sometimes hear imams say things like ”when you see a black person look in their hearts, not at their faces”, like what’s wrong with my face?! And in wider society, a lot of black, or African, people are at a disadvantage anyway because we have little to no written history. Our history is mostly generational, passed down to families orally. In the West, our history has been written down for us by colonialists and slave drivers who tried so hard to prove black people were inferior. It’s that quiet notion that there is something inherently wrong with black people or dark skin. I wanted a way of preserving and showcasing my history and culture myself. I started getting requests from afro-hijabi bloggers to create images of them and I knew this was something lots of other people identified with, it’s something that’s needed.

As a small business owner yourself, you often call for people to support independent black and Muslim-owned brands. Why is that so important to you?

I sometimes think that we beg large brands and companies to include and portray us but the reality is that we just need to support each other and create our own spaces. You see brands like Nike and Kanye West pitching to the Muslim market, they know that we have money and spending power and they use that so what better way to support each other than to use that spending power on each other. I love Halima Aden but I gave Nike the side eye when they came out with a sports hijab. I would rather spend my money on someone who’s been making these hijabs for years and who actually knows what they are doing. You can tell the difference when it’s made by Muslim women. For example, I was looking for cheap underscarves and I came across Modanisa, a Turkish brand. I bought an underscarf and it was designed to be breathable and not pull my edges off, you know, it’s small details like that. You can clearly see it was designed by Muslim women for Muslim women, I’d rather support that.

It’s exactly the same with supporting black-owned businesses. Marc Jacobs had white women sporting dreadlocks in his runway show and he didn’t reference black culture at all. There’s nothing wrong with being inspired by different cultures, just like we are inspired by different art forms. But, there is a problem when you do not say the artist’s name or even reference them. It’s the same with people like Kim Kardashian – magazines see her wearing corn rows and all of a sudden publish it as a trend. People often confuse appropriation, appreciation and assimilation. For me, when you assimilate you sort of have to dumb down your culture in order to fit into society, appropriation is pure plagiarism and appreciation is when your surrounded by a culture, you’re inspired by it and you reference it. I think a good example is Habiba Da Silva. She got a lot of hate for appropriating Nigerian culture but when you look at it properly, she’s been to Nigeria numerous times, she’s surrounded by Nigerian culture and has Nigerian friends. She’s clearly inspired by it and tells her followers about it whilst also supporting Nigerian and black-owned brands. I think she’s using whatever privilege she has to showcase another culture on her platform. I really believe that because of her SKIN range we are seeing more black hijabi models used by modest fashion brands as well. 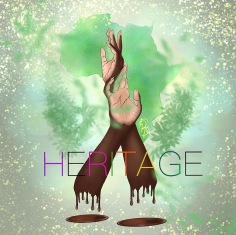 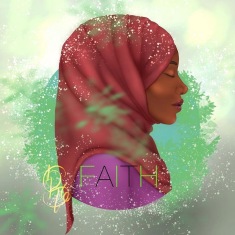 As well as selling your artwork, you also had your own henna business at a young age. How did that come about and what made you want to work yourself?

I started Henna Royals with my friend Hanaa, we did henna for women in our local community. Similar to the art, I was terrible at first and Hanaa was amazing, but I practiced a lot. I started a blog because I have a lot of thoughts running around my head which makes me talk a lot so I needed an outlet to just release everything. That was my first experience of working for myself. Before we tied everything up with Henna Royals, I had a steady income from it and I found that I really enjoyed working for myself. I could control my income and know exactly where everything was coming from and where everything was being spent. I realised I don’t want to work for anyone. I have ideas that I want to put out there. I’m currently training to be a maths teacher and I absolutely love teaching but at the same time I don’t like the constrictions and confinements of being employed and having everything you do depend on other people, if that makes sense. This probably comes from me moving around a lot when I was growing up. I was born in Nigeria, lived in Kuwait for nine years then moved to Liverpool and went to university in Derby.  I love doing henna but I don’t have time anymore. I prefer the art work because it’s digital so I can work from the comfort of my own home. But also, I can’t express my culture, my heritage or my thoughts on someone’s hands! That’s why the art is so fun because I can play around with new concepts. Since I produce my own content, people come to me with collaborative ideas, which I love, and I can choose who I want to work with.  I loved making the logo for Halcyon and hearing about how you came up with the concept and all your ideas. It’s so inspiring to me. I enjoy hearing about people’s creative process and building a community of women who are looking out for each other and working together.

If someone walked up to you and asked for advice what would you say?

Knowledge is power. Read a lot but question what you read. Don’t believe what you are told until you have done your own research. And lastly, don’t just talk about stuff, do it.

Ramadan Kareem! Alhamdulilah for another year! What are your Ramadan goals? Comment down below 👇🏾🤩🎉
Happy International Women’s Day!💜 #internationalwomensday Tag the women you love & appreciate below! 🌟
What a beautiful celebration of #InternationalMotherLanguageDay 🥳 thanks so much to @hafsa_maleeeek for the stories takeover and thanks to everyone who commented and sent a video! So beautiful and humbling to hear all of your experiences! Let’s make a pledge to continue preserving our mother languages so we can pass down the magic they hold to future generations🙏🏾❤️
HAPPY INTERNATIONAL MOTHER LANGUAGE DAY! 🥳🎉
To celebrate International Mother Language Day on Sunday 21st Feb, Hafsa Malik will be doing and IG stories takeover on @halcyonmaguk 😍 Hafsa recently wrote about her experiences with multiple languages and her journey to self acceptance (link in her bio) We’d love to hear about your experiences with your mother tongue or a language you identify with! Leave a comment or question for Hafsa or you can even send in a 10 sec video telling us your favourite word or phrases from your mother language with an English translation 🙏🏾 so excited for Sunday!! @hafsa_maleeeek 🎉
In honour of #WorldHijabDay here are some hilarious Tik Tok videos
Loading Comments...
%d bloggers like this: